Background: Bronchogenic cyst (BC) is a congenital cyst, which is frequently observed in the mediastinum. Its recurrence after surgical resection is very rare and mainly caused by the persistence of a part of the primary BC's wall.

Objectives: Our aim was to present two cases of recurrent BC that were diagnosed in our Department. Besides, we targeted to perform a mini-review of similar cases reported in the English literature.

Results: We describe 2 cases of mediastinal BC which recurred after 14 and 33 years. Both patients presented respiratory symptoms and the diagnosis of recurrent BC was suspected by the radiologic findings and confirmed by the microscopic examination. This phenomenon is very rare and has been initially reported by Craig Miller et al. in 1978. The cyst caused recurrent bronchial obstruction and compression of the superior vena cava and pulmonary artery. Since then, only ten cases have been reported so far (seven in the English literature, two in the Japanese literature and one in the French literature).

Conclusion: Both cases reported highlights that despite the invasive nature of the recurrent BC, complete surgical resection must be always tried. 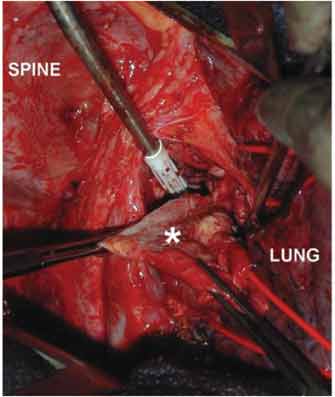