Liquid Biopsy as Surrogate to Tissue in Lung Cancer for Molecular Profiling: A Meta-analysis


Background: The accurate microscopic diagnosis of lung cancer has become insufficient due to the concept of personalized medicine. Tissue samples are used not only for microscopic diagnosis but also for the assessment of the different targets. Biopsies are performed in 80% of the patients and they are not sufficient for molecular diagnosis in 30 % of the cases. Liquid biopsy (LB) has been reported as a possible surrogate to tissue samples and has been introduced in the management scheme of the patients since 2014. We aimed to highlight the diagnostic value of liquid biopsy in assessing the molecular profile of non small cell carcinomas in comparison with tissue biopsy.

Methods: We retracted eligible articles from PubMed, Embase and Cochrane databases. We calculated the pooled sensitivity (SEN), specificity (SPE), positive likelihood ratio (PLR), negative likelihood ratio (NLR) and diagnostic odds ratio (DOR). A summary receiver operating characteristic curve (SROC) and area under curve (AUC) were used to evaluate the overall diagnostic performance using the Meta-Disc software 5.1.32. The heterogeneity was assessed using I square statistics. A metaregression was performed in case of heterogeneity. In case of absence of covariates, a sensitivity analysis was done in order to assess publications that induced a statistical bias.

Results: 39 eligible studies involving 4782 patients were included. The overall statistical studies showed heterogeneity in the SEN, SPE, PLR, NLR and DOR. No threshold effect was revealed. The meta-regression incorporating the ethnicity, the test, the technique used in tissue and plasma and the use of plasma or serum as covariates showed no impact of these factors. A sensitivity analysis allowed achieving the homogeneity in the SPE and DOR. The overall pooled SEN and SPE were 0.61 and 0.95 respectively. The PLR was 9.51, the NLR was 0.45 and DOR was 24.58. The SROC curve with AUC of 0,93 indicated that the liquid biopsy is capable of identifying wild type samples from mutated ones with a relatively high accuracy.

Conclusion: This meta-analysis suggested that detection of molecular mutations by cfDNA is of adequate diagnostic accuracy in association to tissues. The high specificity and the moderate sensitivity highlight the value of LB as a screening test. 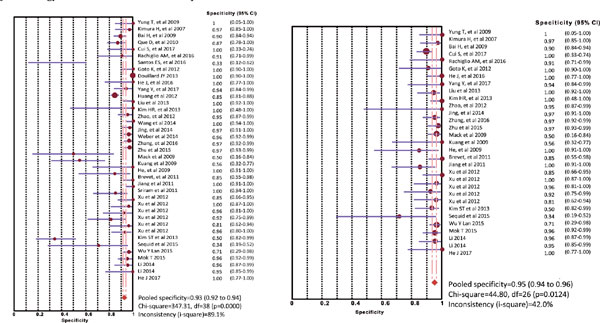