Rationale: Lung function tests are often underutilized in assessing children hospitalized with asthma prior to discharge. We hypothesized that children with status asthmaticus may have more airflow obstruction and air trapping on lung functions than is apparent by physical examination alone.

Methods: We retrospectively reviewed pulmonary function tests (airflow and lung volumes) of children admitted to Norton Children’s Hospital (a tertiary care center) with asthma over a two-year period. Patients performed pulmonary function testing, according to ATS criteria, when the treating physician felt the patient was ready for discharge based on clinical improvement and the respiratory assessment score. Patients (ages 6-17, mean 12 years) were included if they had an admitting diagnosis of asthma and were able to perform lung function testing (both spirometry pre- and postbronchodilator and lung volumes). Lung function tests were excluded if they showed poor to variable effort based on flow-volume loop or a purely restrictive pattern in airflows.

Results: We analyzed one hundred sixty-three lung function tests obtained over a two-year period. The mean FEV1/FVC ratio measured 0.78 (range 0.46 to 1.0), while the mean RV/TLC ratio measured 0.32 (range 0.14-0.53). Lung function testing showed moderate to severe air trapping (RV/TLC >31) in 55% of tests. 44% of tests had FEV1 less than 80 percent predicted. 58% of tests showed FEV1/FVC ratio less than or equal to 0.8. A negative correlation was seen between FEV1 and RV/TLC as well as between age and RV/TLC. We observed no correlation between the FEV1/FVC and RV/TLC. The highest RV/TLC ratio (0.53) had a normal FEV1/FVC ratio (0.91).

Conclusions: We found children admitted with asthma to have more severe airflow obstruction and air trapping on spirometry than was apparent on physical assessment. Assessment of lung volumes may provide physiologic information which is not evident by spirometry alone. Further study on its role in clinical inpatient care is warranted. 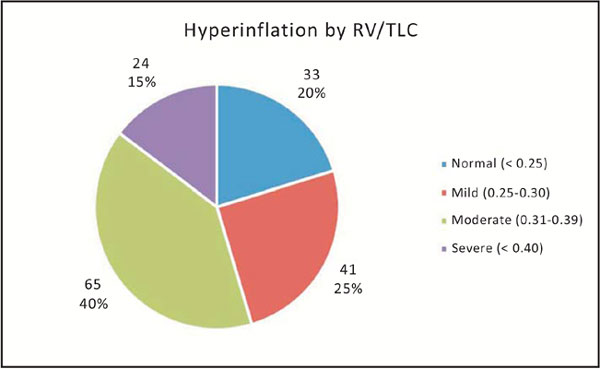