Bronchial asthma is one of the most common and severe diseases among children. The phenomenon of creatinuria (CU) in patients with bronchial asthma (BA) has been acknowledged for a relatively long time.

Aims: The Aim of the research is to study the level of creatinuria, creatinemia, creatine kinase activity, and the concentration of calcium in biological medium (blood, saliva, urine) in children suffering from an intermittent and persistent form of asthma during the period of exacerbation.

Materials and Methods: The research consists of 102 children with asthma who were treated in inpatient department in Simferopol Clinic. The intermittent course of asthma was recorded in 49 children and a persistent course of asthma was recorded in 53 children. The subject of study was blood serum and daily urine of observed patients. The level of calcium in the biological medium was studied using the "Filisit" test kit (Dnipro) and the activity of the creatine kinase by test set "Lahma". The levels of creatine and creatinine were determined using a colorimetric method based on a color reaction with picric acid.

Conclusion: The processes of creatinuria and calciuria in children suffering from a persistent form of BA are interdependent, that is testified by the data of correlative analysis. In connection with this, it is possible to consider the change of calcium homeostasis in the pathogenesis of the disease as one of the causes of distributing the creatinine metabolism on the cellular level. 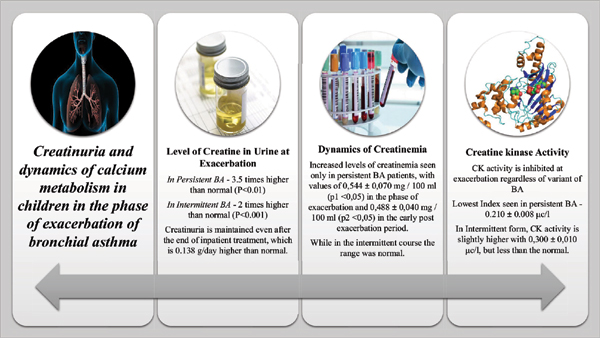