Background: Type 2 diabetes mellitus (T2DM) is a chronic condition with an impairing effect on multiple organs. Numerous respiratory disorders have been observed in patients with T2DM. However, the effect of T2DM on pulmonary function is inconclusive.

Aims: In this study, we investigated the effect of T2DM on respiratory function and the correlation of glycemic control, diabetes duration and insulin intake.

Methods: 1500 patients were recruited for this study; 560 having T2DM for at least a year were included in the final data, in addition to 540 healthy volunteers. Forced expiratory volume in one second (FEV1), forced vital capacity (FVC), forced expiratory flow at 25-75% (FEF 25-75%), as well as FEV1/FVC ratio values were measured.

Results: A two-sample t-test showed that z-scores produced by Al-Qerem et al.’s equations for FEV1, FVC, and FEF 25-75% were significantly lower for the T2DM group than the control group (p < 0.01). FEV1/FVC ratio in the T2DM group was significantly higher (p < 0.01). Multiple linear regression analysis found that glycemic control represented by HbA1c as well as disease duration were negatively associated with the pulmonary function (p < 0.01). However, insulin intake was found to have no significant correlation with pulmonary function. 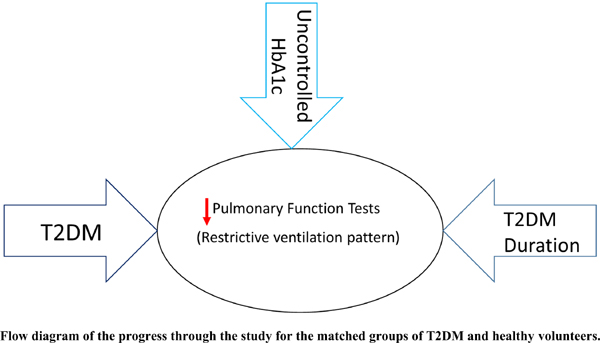